How to Squash those Holiday Cravings 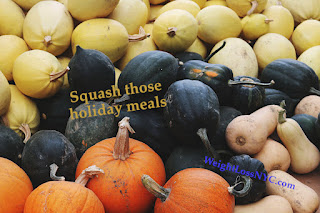 Filling up on veggies is a top rule for anyone wanting to eat healthier, yet that doesn't have to sound boring. Check your favorite produce store for winter squashes, including the amusing shaped butternut squash. Like its cousin the sweet potato, it's often overlooked as a starch, yet the orange interior reflects it is rich in beta carotene, which converts to vitamin A in your body.

One cup of Butternut Squash (cubed and cooked) yields 127% of the US RDA for Vitamin A, with 80 calories, 4g sugar, 21g of carbs. Far more favorable than mashed potatoes with (or without) gravy! Factor in the 7g of fiber and you're on your way to RDA daily mark of 25-30g fiber per day.

Beta carotene, as one of the team members of antioxidants, on its own offers many nutritional benefits. Butternut Squash also has ample potassium (more than the benchmark banana) plus 30% of your daily RDA of Calcium. Other minerals at hand include Iron and Niacin, along with Vitamin E.


Summing it up with preparation, all of these can simply be sliced and roasted, with familiar spices like cinnamon and nutmeg, or clove or allspice. For easier prep you can often buy these pre-cut in stores, though caution on canned variants due to added sugars. You can even puree squashes to make satisfying soups and sauces too. Some folks even suggest smoothies, accompaniments such as apple, nut butter and soy or almond milk.