Author: Oksana Aron, MD Source: Weight Loss NYC Aug 30, 2009
Moms around the world warn their kids that too much sugar — or fructose — will rot their teeth, but did they ever think it could also affect their memory?

Researchers at Georgia State's Neuroscience Institute and Department of Psychology found that after feeding a group of Sprague-Dawley rats a diet that was 60 percent fructose, the rats' memories were impaired. Fructose is a type of sugar found in processed foods and sodas.

Fructose, unlike another sugar, glucose, is processed almost solely by the liver, and produces an excessive amount of triglycerides — fat which get into the bloodstream. Triglycerides can interfere with insulin signaling in the brain, which plays a major role in brain cell survival and plasticity, or the ability for the brain to change based on new experiences.

Results were similar in adolescent rats, but it is unclear whether the effects of high fructose consumption are permanent, she said.

Human diets typically do not consist of the same high amount of fructose as the rats in the study, however, foods containing fructose and high fructose corn syrup are being consumed at increasing rates. Diets high in fructose can potentially cause such health issues as insulin insensitivity, type 2 diabetes, obesity and cariovascular disease. Many foods now contain fructose, but keeping your diet checked and eating foods with fructose in moderation can make a difference. —ScienceDaily

Author: Oksana Aron, MD Source: Weight Loss NYC
Losing weight can improve your health and overall well-being. You look better. You feel better. It can also boost your mood. And now, a new study has shown that weight loss can also improve mood in those suffering from depression.

Clinically depressed individuals are rarely ever used in weight loss studies, and this research necessitates further studies on how weight loss affects those suffering from psychiatric disorders. It's also one of the many reasons to strive to be at a healthy weight. —ScienceDaily

Author: Oksana Aron, MD Source: Weight Loss NYC Aug 23, 2009
Peer pressure can be a powerful force, but does that also influence eating habits? A childhood obesity study recently found that friends can influence the amount of food you eat, and that includes overeating.

23 overweight and 42 normal weight children between the ages of 9 and 15 were involved in the study published in the August issue of the American Journal of Clinical Nutrition were paired in groups of familiar and unfamiliar children. Each pair sat in a room for 45 minutes with bowls of low-calorie snacks such as baby carrots and grapes and high-calorie snacks such as potato chips and cookies. The children were told to eat as many snacks as they wanted from their own bowls.

Sarah Salvy, Ph.D., assistant professor in the Division of Behavioral Medicine, Department of Pediatrics, University at Buffalo School of Medicine and Biomedical Sciences told the ScienceDaily that "both overweight and normal weight participants eating with a friend ate significantly more than did participants eating in the presence of an unfamiliar peer. These results are consistent with research in adults, which showed that eating among friends and family is distinctly different than eating among strangers." --ScienceDaily

Get Motivated! We Can Help!

Weight loss motivation is an integrated in our comprehensive bariatric program. Motivation is the key to successful weight loss. Learn to improve motivation to develop health, fitness and a great body! These are just some of the many strategies you will be introduced as part of our weight loss program. They are intended to help you to stay motivated and focused on your success.

Author: Oksana Aron, MD Source: Weight Loss NYC Aug 14, 2009
Like you, we are trying to follow and make sense of the recent efforts to revise health care, and offer you this public service announcement via the White House website

Learn more and get details: http://www.WhiteHouse.gov/health-insurance-consumer-protections/

If you have questions about our own weight loss fees, feel free to view our frequently asked questions section.

For many years "the pill" has been blamed for weight gain in women, causing many to forego taking that particular method of birth control, but recent research has shown it is not the culprit.

The birth control pill is an effective hormonal method of contraception, and has often been seen as the cause of weight gain. However, clinical trials have found there is no causal link between birth control and weight gain, especially considering that women gain weight as they age -- whether they take birth control or not. In fact, choosing not to take the pill doesn't necessarily help women control their weight either.

There are no quick fixes to shedding pounds, but leading a healthy lifestyle and maintaining a well-balanced diet is still the number one way to lose weight the healthy way.

Author: Oksana Aron, MD Source: Weight Loss NYC Aug 8, 2009
If you want to be skinny, you've got to think like a skinny person. This doesn't mean thinking is being, but delving into the diets of real-life skinny folks reveals some interesting food facts that could help you get or stay thin.

If you like this list, be sure to check out our own weight loss tips, and of course, schedule your first visit with the diet doctor today! 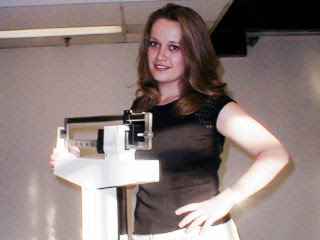 Author: Oksana Aron, MD Source: Weight Loss NYC Aug 3, 2009
Based on a report published in Pediatrics, children who have a tonsillectomy (with or without their adenoids removed) have a higher risk of being overweight in later years.

The data came from a study of 3,963 children in the Dutch Prevention and Incidence of Asthma and Mite Allergy (PIAMA) birth cohort study in which height, weight, tonsillectomy status and other factors were assessed through yearly parental questionnaires.

Authors of the study conclude that parents should be armed with information on dietary and lifestyle choices if their children are having a tonsillectomy performed, and also recommend that children's weight and growth be closely monitored following surgery. —Reuters