What is raspberry ketone? 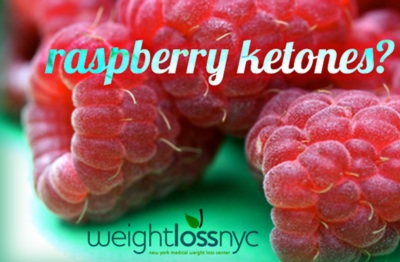 Pop culture Dr. Oz and others cheer on support for raspberry ketone as a natural weight loss supplement. Dr Jennifer Seger from the American Society of Bariatric Physicians offers this response:

“Raspberry ketone [4-(4-hydroxyphenyl) butan-2-one] or rheosmin, is a compound extracted from raspberries, blackberries, peaches, apples, rhubarb, grapes and the bark of some trees. It is similar in molecular structure to capsaicin (found in chili peppers) and synephrine (found in bitter orange trees)- two compounds that are thought to exert anti-obesity actions and alter lipid metabolism. It is hypothesized that the method in which raspberry ketone helps with weight loss is related to an increase in norepinephrine-induced lipolysis. The data supporting this claim is extremely sparse. After searching various online medical and scientific databases, I found less than a handful of studies specifically related to raspberry ketone and weight loss, two of which are rodent studies. One study suggests that when rats were fed a high-fat diet with raspberry ketone, there was prevention of fat storage and increased lipolysis in the liver compared to the control group on a high-fat diet 1. An in vitro study had a similar finding in that when adipocytes were incubated with raspberry ketone, there was an increase in lipolysis and fat oxidation, suggesting that this compound may aid in limiting fat accumulation2. It is important to note, however, that no studies have been conducted in humans to elucidate the effect of raspberry ketone on in vivo lipolysis and fat oxidation. Raspberry ketone has been used in cosmetics and as a food additive for decades, and in its "natural" state, it is quite expensive. Nowadays, raspberry ketone is primarily synthesized in a lab and is a very inexpensive additive for the aforementioned purposes. The safety data, though quite limited, do not reveal any significant concerns but there are no large studies regarding this. With a combination of extremely limited efficacy and safety data, substantial health benefit claims, a population desperate for results and large profit margins, it is no wonder that raspberry ketone is one of the top-selling nutrition supplements on the market right now. At this point, though, the use of raspberry ketone can be based on only anecdotal experience and insufficient scientific data. Hence, I currently cannot recommend the use of this supplement.”